Students Launch the Fightback Against Cuts and Fees in Style 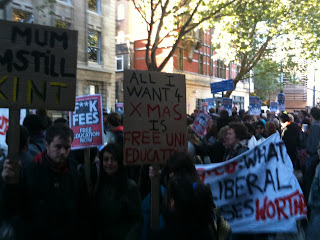 Westminster students enraged by the ConDem government's plans to cut back education spending on an unprecedented scale, and to set fees soaring at the same time, joined over 600 students on an anti-cuts demonstration last Wednesday against the official announcement of budget cuts made in the Comprehensive Spending Review (CSR).

Students angered by the prospect of an education system falling into disrepair from universities across London met at the University of London Union, on Malet Street, and fed their protest into a much larger demonstration of over 3, 000 workers and trade unionists for a march to Downing Street. See: http://www.guardian.co.uk/politics/2010/oct/20/protest-government-department-spending-review (look out for Westminster students involved in The National Campaign Against Fees and Cuts in the video too)

This marked only the very beginning of the struggle which now faces students and workers alike. Who are about to embark on a period which - as some more relastic estimates have put it - could see over 3 million people unemployed. This will not only be disastrous for the average worker trying to bring home the beans for the family, but, it also means there will be a dire lack of jobs for graduates too.

Students will have a dual role to play in times ahead: fighting for the right of employment and fighting to protect education.

If the government gets away with what it intends, this will mean the end of education as we know it. The end of social mobility; the end of a decent education for all; the end of the chance for people to live out their potentials.

A quality university education would only be afforded by the rich, the rest of society will be left with two year 'vocational courses'. The enlightening and life transforming chance to spend three years in all sorts of academic enquiry will no longer exist for the vast majority.

This is nothing short of a disaster.

Fight Cuts at Westminster, along with help from the lecturers union UCU, has been rallying students over the past two months and previous academic year at a set of different events including 'ConDem The Cuts To Education', which heard from the likes of left-wing legend Labour MP, John McDonnell and The National Union of Students' Education Officer, Usman Ali.

We held our first protest of the term at Regent Street Campus on Wednesday (before marching to ULU) and are now looking to step up our activity and ramp up student engagement. Together we can beat the cuts! Last year our actions, which included a three day occupation of the Vice Chancellor's Office, managed to save 100 jobs. This year we must save them all.

So, to get involved in the fight to save our education, keep an eye out on facebook for our events and organising meetings. Do come along!

Sing, shout, protest .. just get the message out.
Posted by Fight Cuts Campaign at Westminster University at 06:01