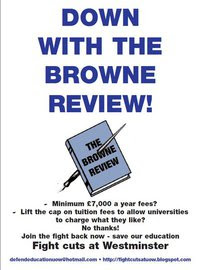 In the run up to the parliamentary vote on 'increasing tution fees' this Thursday, 9th December (http://www.facebook.com/event.php?eid=136567579732280) it is imperative we keep up the pressure on our Local MPs and advocate they vote against against it.

The Lib Dems are in a particularly vulnerable position as part of the coalition who gained many of their votes from students who they had promised not only to stop increasing fees,... but to banish them all together!

Reports show the student movement against fees and cuts has already made massive inroads as the very MP who put forward these proposals, Vince Cable, has come out and publicy said he may well abstain on the vote (http://www.thisislondon.co.uk/standard/article-23902468-vince-cable-admits-he-could-abstain-in-tuition-fees-vote.do).

This is just the beginning.

The University of Westminster's Harrow Campus has many students who reside and vote in the Brent Central area where Lib Dem MP Minster for Children and Families, Sarah Teather, holds a seat.

She is keeping low on the radar and has not announced how she will vote on the 9th. This is good .. She is clearly not confident to come out and say she will vote in favour.

We know that in the past, as the Lib Dems Minister for Education, she has voted strongly-against student top-up fees. let's hold her to account and make sure she follows this logic in the vote on the 9th.

She has also voted against the war in Iraq and the Trident nuclear programme. UWSU has a free education policy and believes that as well as taxing big business, these are two other areas where funding for education could be found. Let's push this message too!

So, this Tuesday we will have a demonstration outside Sarah Teather's constituency office where we will pass over a set of demands including 'a vote against rising tuition fees' and a warning (including signed petitions) that Brent students will not vote for her if she fails to deliver what we've asked.

It will be peaceful and lively demo complete with chanting, singing and a special prize for the most imaginative UWSU/student banner.

Meet outside her office at 3pm or, meet at Harrow Campus on the street at 2pm and we'll travel together.

STUDENTS REALLY NEED TO COME OUT FOR THIS, WE CAN BEAT THE RISE IN FEES IF WE TAKE ACTION NOW!

Finally, Robin Law, UWSU President, went to the National Union of Students headquaters last week and they've estimated that the vote on tuiton fees is very close - 300 for and 293 against! Westminster students, we have everything to play for .. let's do it.

For more information call your VP Education, Jade Baker, on: 07595738396
Posted by Fight Cuts Campaign at Westminster University at 15:18