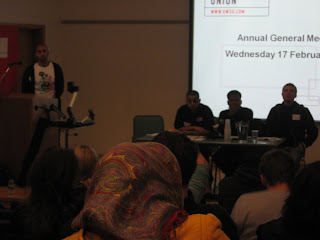 The meeting, held yesterday at Harrow Campus, was not a complete farce however and did give some speck of hope for happier days ahead. Albeit a minor one; did you know that our SU is one of a kind, it is the only SU in the country line managed by a member of university staff? Canny.

Unfortunately, a combination of a depoliticised student population and union members that have carelessly and seriously abused their positions has led our union down a vertiginous slope, and until yesterday it found itself in a state of 'frozen subvention.' I.E. The university had ceased funding the union.

The first motion put forth was by a union member and was passed; to combat the funding freeze, this motion included bringing external members from other institutions to sit on their board of trustees as well as other university staff on an 'interim' basis (which had been suggested by the university).

We did not advocate for this to be passed as it defeats the core values of a 'student's union' and further contributes to the bureaucratisation of the university.

However, as it did go through, this means the death of the SU is not nigh and all the better for the fight cuts campaign.

Simon Hardy, a member of the Fight Cuts at Westminster Campaign, put forth our motion which essentially asked the student union to formally recognise our campaign and to support the students and tutors in whatever action they may wish to take.

To our delight, it was a unanimous pass.

This now leaves us in a great position to persevere with the campaign; it also leaves us with an opportunity to work with our SU and help build it from the bottom up again, if possible.

Let's not let this one go - all students deserve the right to a union with their interests at heart.

MOTION: Oppose cuts at The University of Westminster and in Higher Education

This Union notes:
* Massive cuts have been announced in the Higher Education (HE) sector. Recent estimates by UCU and the Russell Group predict that cuts in HE may add up to as much as £2.5bn - or 33% of total HE funding.
* Job cuts have also been announced at the University of Westminster. As part of a restructuring plan, 150 academic staff (not including technical and administrative staff) will be made redundant by April 2010. This follows the closures of the Ceramics department and of the nursery.

This union believes:
* Management has not been transparent in dealing with the financial problems currently facing the university.
* Management attempt to deal with the current financial problems is a shortsighted one.
* That these proposed cuts are only the beginning of a much wider programme of cuts.
* Students' experience at university will be severely compromised by these job cuts. Fewer staff means bigger class sizes, less time with tutors, and less time for staff to prepare seminars and lectures. This will worsen the level of satisfaction of students of Westminster University, which is already amongst the lowest in the country.
* Education is extremely important, particularly during an economic crisis. education represents one of the few viable alternatives for young people at a time of increasing unemployment. The government should invest in education as other countries are already doing (e.g. Germany, USA).

This union resolves:
* To defend jobs and education
* To actively oppose any cuts in this university and all funding cuts in the HE sector.
* To call on management to:
a) Issue a statement on the avoidance of redundancies;
b) make freely available to the unions in the university appropriate financial documents including accounts, planned project expenditure, and staff expenditure to enable a transparent review of the university's financial position;
c) produce alternative, sustainable plans for addressing the financial gap over the next several years.
* To officially support the "Fight cuts campaign at Westminster" and to actively promote it.
* To formally support the London Education Activists network and the National Campaign Against Fees and Cuts.
* To promote the National demonstration on Saturday, March 20, organised by the UCU and London Education Activists Network.
* To support any industrial action taken by our lecturers and members of staff as a result of the cuts.
* A vote of no confidence in the vice-chancellor and management
Posted by Fight Cuts Campaign at Westminster University at 05:35