Unlucky: Outright Vote of No Confidence for Vice-Chancellor Geoff Petts 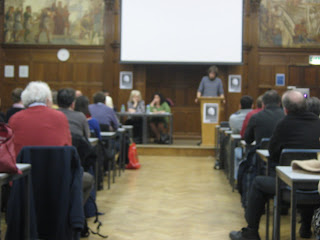 Over 150 staff and students placed a unanimous vote of no confidence in the vice-chancellor, and his management, at a rally addressing Westminster's severe proposed job cuts.

The meeting, which took place yesterday, saw encouraging and emotive speeches from Union representatives, one of whom revealed that the latest slashes are set at 190 academic and 90 administrative jobs.

A Unison representative clarified that up until a year ago finance papers showed that the university was operating at a surplus of over two per cent, therefore, she and others across the board claimed it suggests that management (who are not allowing public access to any finance details at the present moment) are simply using Mandleson's Higher Education cuts and their '11 million budget deficit' as a guise to fulfil an already planned agenda to slim down on staff and further marketise the establishment.

To place this in perspective it was later revealed that the university plans to spend 61 million on a new building project, ironic, seeing as there will be considerably fewer lecturers to fill it.

Furthermore, a representative from the University and Colleges Union (UCU) pinpointed to a study undertaken by the union which has disturbingly found that whilst academic positions have only risen by three per cent, managerial positions with an allocated wage of £100, 000, have risen by 25 per cent.

"This has attributed to a management clique, who live upstairs, and have no idea of what's going on on the ground," she declared.

This sentiment was shared across the board, a speaker and lecturer involved in the struggles at London Metropolitan University, riled staff and students alike by describing the process which led to their feat over the Vice-Chancellor and the board of governors; ballots, strikes and student occupations.

However, an ex National Secretary of the UCU gave some hope by urging staff to remember that there has not been a single voluntary redundancy at Westminster for 20 years, due to staff resistance.

Even so, a computing lecturer from the floor, for example, revealed that his department of 150 is set for a hammering of a third of the positions.

With this and other revelations, a sense of urgency swept the floor and led to an exciting dialogue of what to do next..

An immediate vote of no confidence for vice-chancellor Geoff Petts and his management was called for and achieved.

Striking was placed on the table, but this can prove to be a long and bureaucratic process, taking up to six weeks.

In the meantime, it is down to us students to support our tutors as much as we possibly can by taking any action necessary to stop management in their profiteering tracks. Not only are jobs at risk but the future of education as we know it is, we can't take this without a fight ... can we?
Posted by Fight Cuts Campaign at Westminster University at 15:04