Back with a vengeance 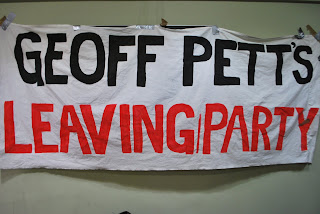 So, maybe we were a little too early in our 'Geoff Petts' Leaving Party' celebrations folks, but don't despair!

After a swift breather (taken in the VC's humble residence) the Fight Cuts Campaign at Westminster is back and ready to wage all out war on campuses near you.

In the last week or so the cuts picture has slowly taken shape and is looking more depressing than ever. As it stands we are loosing the entire Ceramics department, over a third of Computing, a fraction of the English department and a mass chunk of the Language's school.

Extrapolating this formidable trend inevitably leads to the question of which courses are next? For it is a certainty that these cuts form only the beginning of a flurry of course extinctions and slashes.

At the Student's Forum last Friday, our good friend Geoff Petts revealed to Students' Union representatives that these cuts are most likely to play part of a national uprooting of HE structures, in accordance with the government's 'vision' for the future of education.

Quite concerningly universities, colleges and secondary schools alike will be encouraged to focus on specialist areas. So, for Westminster this means degrees will be based within the 'applied approach' realm; basically vocational courses.

What this implies for the future of education is tragic and disgustingly unjust. Academic, 'blue sky' courses, will only be available at elite establishments. This will no doubt further the class inequality gap and hinder many students from reaching their potentials, or at least cease in providing them with a chance to fulfil them.

This is why we call for all students to stand in solidarity with their lecturers over the following months, to fight alongside them for their right to work and for our right to a better education; one in which future generations will not be boxed into specific academic routes.

Freedom for all avenues of education is what we demand, and we will not stop our struggle until we achieve it.

Join the rally next Wednesday, March 17, Marylebone Campus, which kicks off the staff balloting period. Together we are stronger!

The anti-cuts campaign/protest/lobby of governors/occupation was supported massively from students and university staff across the continent.

Here is some of the news generated: Indymedia, Libcom, The Journal, Socialist Worker, Revolution, Education Not For Sale, CNNireport
Posted by Fight Cuts Campaign at Westminster University at 17:09